Your bitesize update on the latest People News and Moves featured on Gorkana News:

Hotwire Group hires Barbara Bates as CEO
Barbara Bates has been appointed as Group CEO at Hotwire, following the departure of Brendon Craigie in March. Bates was most recently North American CEO of Hotwire following the acquisition of her agency Eastwick, an integrated communications agency in Silicon Valley.

Revolut, an app-based banking alternative, has brought in Rocket Internet’s Chad West as its global head of comms. West was previously PR and comms manager for Rocket Internet’s Hassle.com, an online marketplace for booking household services. Before that, he worked agency-side on public affairs and government relations at Remarkable Group.

Chris Sanderson revealed as Cision World Tour London keynote
Renowned brand strategy consultant Chris Sanderson is to be the keynote speaker at next month’s Cision World Tour summit in London. Sanderson, co-founder of The Future Laboratory, will provide his expert insights into the macro trends driving modern PR strategy and will outline how you can leverage them to create opportunities for your business, charity, agency or brand. 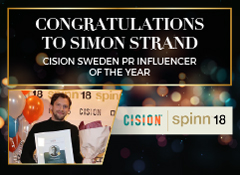