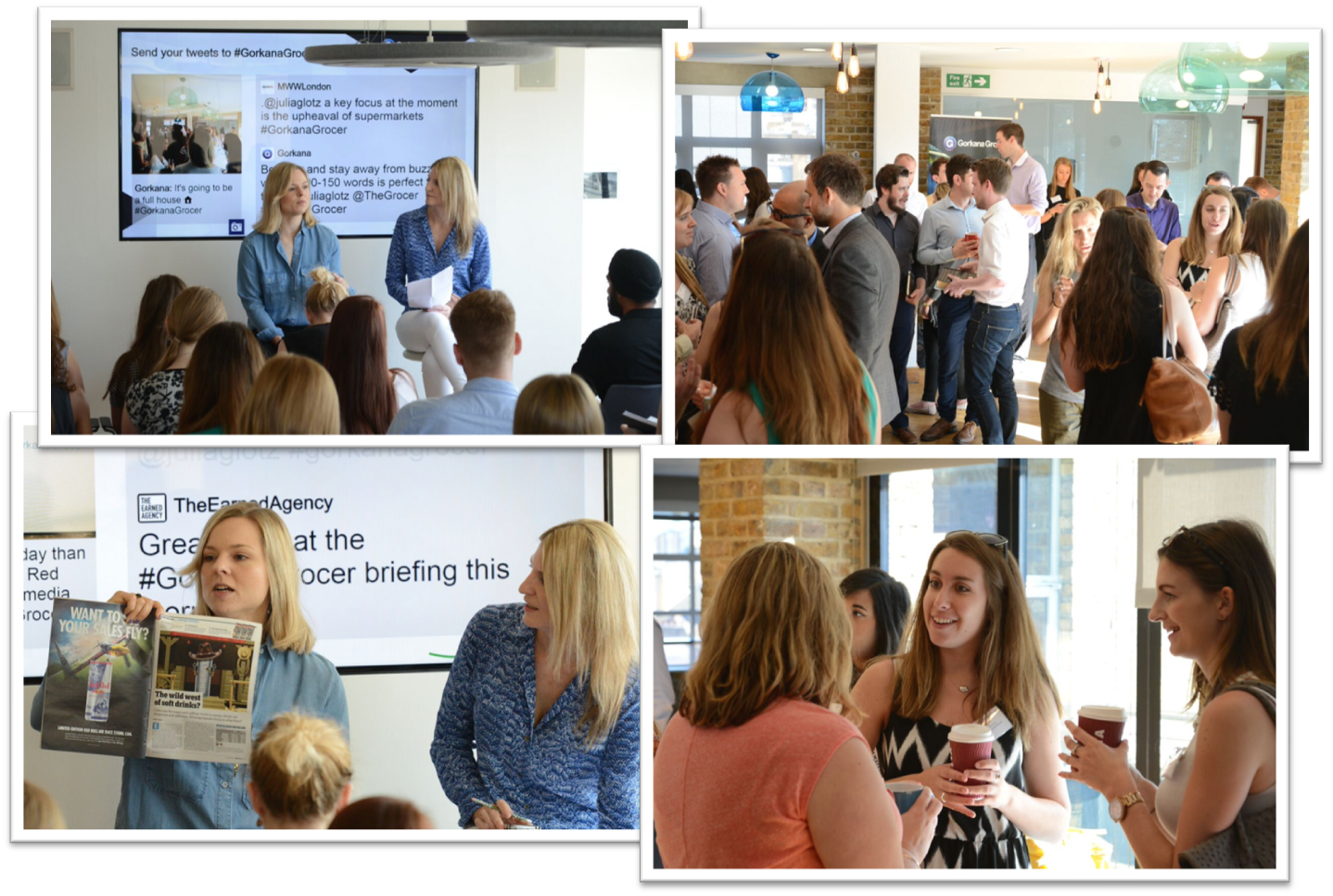 Gorkana held a media briefing with Julia Glotz, managing editor at The Grocer, on 3 July, kindly hosted by The Red Consultancy at their offices in London.

The Grocer is a weekly trade publication on the UK food and drink industry. The magazine contains news, finance, marketing, personnel and special focus features relating to the grocery and fast moving consumer goods business.

Julia Glotz, managing editor of The Grocer, on the magazine’s 153-year heritage, web first content and why PR relationships are so important.

The Grocer is a weekly trade publication about the UK food and drink industry. The magazine contains news about finance, marketing, personnel and special focus features relating to the grocery and fast moving consumer goods business.

The magazine has been published weekly since 1862 and Julia says it’s longevity can be attributed to three factors:

The team
The structure of The Grocer team is made up of features desks and news desks. On the features side there is a news-driven features desk and a special reports desk.

Special reports are weekly reports on a specific category (i.e. energy drinks), which are written off the back of exclusive data provided to the team. Forward features for special reports are available on The Grocer’s site.

For everything else, PRs should be looking to The Grocer’s news desks:

The news and features desks are supported by subs, arts, and commercial teams.

The Grocer readers
The Grocer is a generalist publication which aims to appeal to everyone in food and drink; from retail executives and CEOs to the corner shop manager. Asda CEO Andy Clarke recently guest edited an issue. There is also a deep readership base amongst suppliers and manufacturers, both senior and junior level.

Moving online and into social media has led to an increase in readership interaction. Traditionally with business titles, readers would get in touch when there was a problem. Now readers are much more ready to engage, as much on the positives as the negatives, via social media.

Content
A typical issue of The Grocer will usually be around 50 editorial pages, but this can vary depending on the size of the features sections. Special reports can vary from three to 15 pages. There are also several special supplements published throughout the year. The Dairyman supplement, published in September, will be around 100 pages. Julia said there still time for PRs to feed in ideas for the supplement to fresh foods editor Carina Perkins, who joined The Grocer two months ago.

The news section is made up of five to six pages of general news, which covers anything from any sector. There is also two pages of finance news, four pages of buying and supplying news (heavily brand and product focused), and four pages of fresh news (a mix of dairy/meat/fruit and veg product launches and issue focused content).

Julia looks after the magazine’s Comment and Opinion section, which is split between ad-hoc content, commissioned each week, and a rota of regular columnists (this sits in the Second Opinion and Talking Shop sections and is not PR-able).

PRs can pitch for The Grocer’s Saturday Essay and Third Party sections. The Saturday Essay is usually around 650 words, whilst The Third Party is usually 450 words. These sections are planned every week, with Julia first working out the news agenda on a Monday, before looking for authors to comment. She receives many pitches for these sections, and it’s key that the person being offered has a news hook.

Food waste is another big interest for The Grocer readers, which is encouraging, says Julia, as CSR stories can be very difficult to pitch in. Food waste seems to be an area that connects well with the public on an emotional level, and has allowed a lot of companies to talk about their commitments around the issue.

The difficultly with many of the other CSR stories she is pitched is sorting “the bullshit from real achievements”. She says she never hears about a bad CSR stories; it’s always “glorious over-the-top achievements and the wonderful things” a brand has achieved. But Julia would question whether these achievements are actually worthwhile. Context always helps when pitching in a CSR story – for example providing data that reveals the base line before a CSR initiative, and how things changed.

Regulation is covered in The Grocer, but the team will only cover what the most important are for the food and drink industry (“we’re not a legal publication”, says Julia). An issue like business rates regulation is a huge area for the magazine, but difficulties arise when someone offers an opinion piece from a company saying that there’s big problems on the horizon and only they can solve them. Brands should accept that often they will simply get their name mentioned in a piece.

Online
The Grocer’s content strategy has changed considerably over the past few months, and Julia says the aim is to be platform neutral. All content is web first, with the team then deciding which online content will make it into the magazine. When it comes to news, the magazine will showcase the best of the week, whist it is online where it will be breaking.

When moving to a paid-for model, The Grocer’s features and special reports initially went behind a paywall, whilst news was free to access. The team has since made changes to its membership options and there is now a bigger emphasis on paid-for content. The magazine invests a lot in its journalists, and wants to protect its content, rather than having it replicated everywhere else online. Having some content behind a paywall also means it’s easy to spot which PRs have actually read content when they’re pitching an idea.

While readership figures are commercially sensitive, Julia says there has been a huge increase in traffic, with increased engagement with content that has been moved behind the paywall.

The team has also launched several free-to-air digital only products, including digital category reports that have proved very popular. These tend to be online friendly features like a ’10 things you need to know…’ piece on a certain category.

Working with PRs
Julia prefers to be emailed pitches and ideas. She is always in the middle of something and a phone call can be distracting; but she checks her emails regularly throughout the day. If it is urgent, then she’s happy to be called, but if it’s a straightforward pitch, drop her an email, at least in the first instance.

She says the best time for emails to get noticed is Monday morning. It’s a fresh week and her mind is set on what’s coming up for the week ahead.

In an ideal world, Julia would like her team to give feedback to PRs about why their story hasn’t made the magazine.

Photos are now important to the team, especially with content being web first. There is a lot more scope to use different photos and artwork. Readers love photo galleries on the site, and the team has run picture-only stories (especially in the Fresh or Buying and Supplying sections).

“Having good relationships with PRs is incredibly important,” says Julia. The team spends a lot of time building relationships and appreciates when PR companies are making a reciprocal effort. Friday is Julia’s best day to meet with PRs (the magazine goes to press on a Thursday).

Lead times
News is now a daily, as well as weekly, business for The Grocer. There are daily meetings where the team discusses the news agenda and what they will be featuring in the print magazine.

There is a also news meeting on a Wednesday when all the desk editors will discuss what’s making it into the magazine. There are several reasons a story may not make it: the timing of the pitch; there is already a similar story; or something else was more important. If a PR thinks the team missed a trick, it’s a case of picking up the phone and convincing them that it’s a strong enough piece to make it into The Grocer.

If a PR has a news story and the team wants to run it, make sure the client is around to respond. Julia has had brilliant pitches come in, but then told the client is nowhere to be found.

Special Reports usually work on a six to eight week lead time. Other features are news-led, so will usually only have a month’s turnover. There is no features list for general features, so PRs need to build a relationship with the general features desk, which is headed up by James Halliwell, to find out what he and his team are working on over the next month.

If you go to The Grocer with something, Julia expects it to be exclusive (and there’s no such thing as a “trade exclusive”). Exclusive means exclusive – it goes nowhere else. If this can’t be delivered, she asks that PRs have an honest conversation about it. She doesn’t want to subsequently find out that it has gone elsewhere.

Standing out
Julia gets “a shit load” of PR pitches every day. PRs need to bear in mind that she doesn’t look after everything on the magazine. Don’t use her as a receptionist; get to know who looks after what on each desk. It will show the team you’ve taken time to get to know the publication.

A brand can make it into The Grocer as long as it is relevant to the reader; if it’s not being sold by major grocers or is not a food and drink brand, there is likely to be less interest.

When pitching opinion pieces directly to Julia, be clear and stay and away from “buzzwords”. She gets a lot of pitches with words like “solutions”, “ecosystems” and “omnichannel environments”. It’s a sure-fire way to get the email deleted.

Be clear on why your pitch is relevant, who your client is and what their expertise is. Also include a small paragraph to give Julia a flavour of what’s on offer.

Because the industry is so competitive, many major companies are not keen to be named, says Julia. “Getting someone to agree to being named can be horrific.” But this can hamper a story’s chance of being picked up.

She wants to convey to her readers what’s happening, the company involved, and why they should care. If you can’t name the person and the company they represent, the story can become too vague. It won’t necessarily spell the end of a news story, but it will depend on how important the client relationship is to the story that is being written. It’s even harder when it’s an opinion piece. Being given an off-the-record brief can allow the journalist to work out how important the company is to a particular issue. Relationships are key.

Big stories for the rest of the year
It’s been an extraordinary year for grocery, says Julia. The level of disruption and upheaval seen has been unparalleled. She foresees a lot of time spent analyzing how this change will pan out for the industry, especially around supermarkets and the dairy industries.

On an economic level, there will be a strong focus on Europe and the EU, which has a huge impact on food and drink imports and exports, be it movement of goods, procurement or currency.