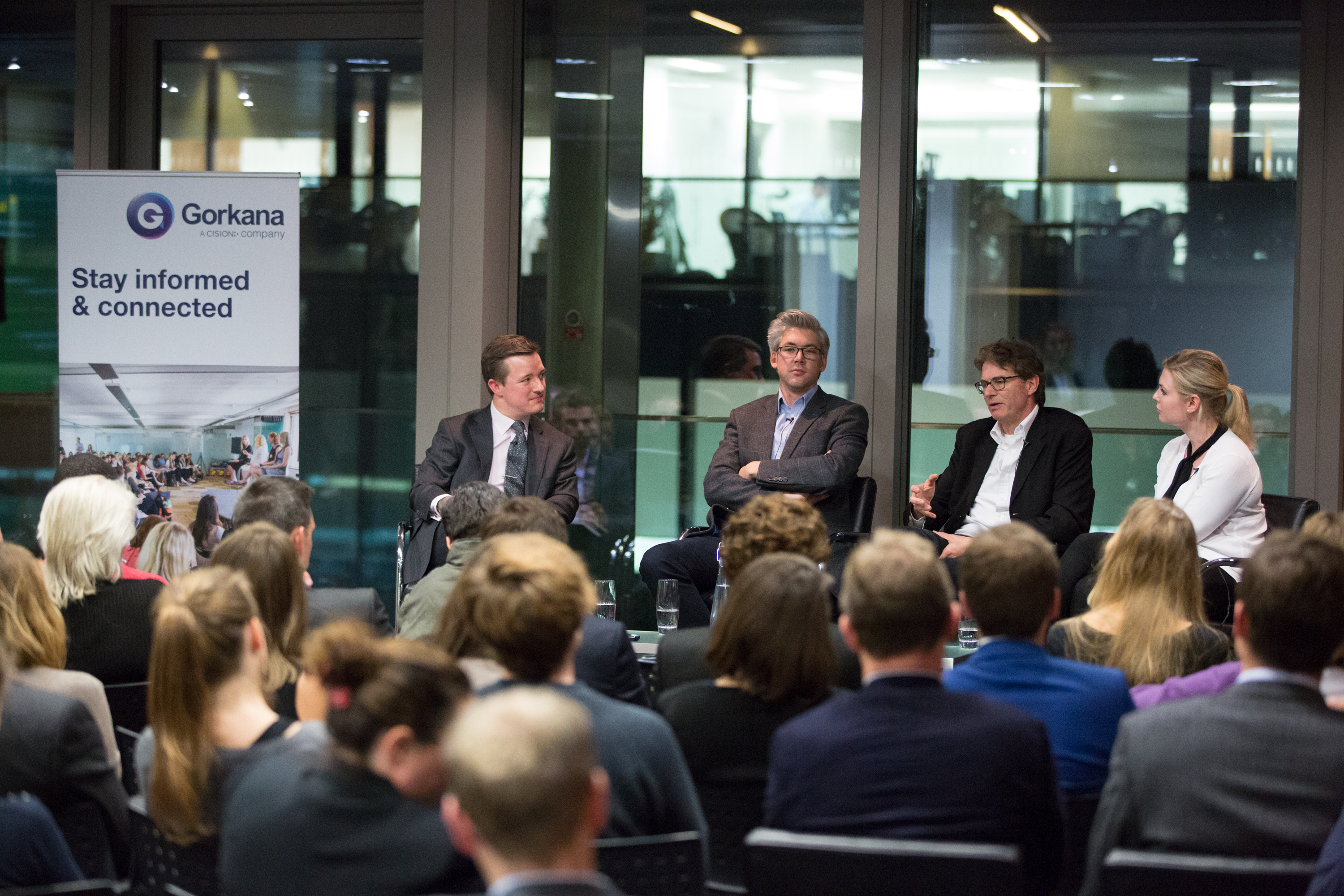 With more than £4 billion invested in Fintech since 2010, Gorkana ran a special panel event, hosted at Grant Thornton’s City of London office, to explore the communications challenges and opportunities presented by this wave of technological disruption in the financial market.

From crypto-currencies like Bitcoin to start-ups like Nutmeg, the potential for disruption caused by these new ideas, technology, and businesses meant there was much to discuss as City A.M. editor Christian May, Alex Letts, co-founder of UK-based digital bank Ffrees (which launched September 2014) and LaSalle Investment Management’s head of corporate comms, Christina Sandkuehler, tackled a range of consumer and corporate comms questions in front of a room full of comms professionals and marketers from in-house teams and agencies.Gorkana‘s head of news and content, Philip Smith, chaired the panel.

With a background in business comms at the Institute for Directors, and now heading up City A.M, May is a well-placed observer on the changing media environment for financial services brands. But when it comes down to the potential threat challenger brands might create – it boils down to influence, he said. Can a brand be challenging enough to actually change behaviour?

Going through the process of changing who looks after your money is a big decision, and the incumbents have an inherent advantage, May added.

Sandkuehler is minded to agree, especially when it comes to professional banking, due to the sheer scale of funds under management.

“Professional investors are not going to trust you with their money if you can’t show a good track record and are uncertain of your ability.”

But success comes if the challenger bank has something unique to offer. Letts, who admitted he wakes up every morning trying to come up with the next thing he can do to shake up the banking system, believes that new brands like his have the ability to prosper because they can offer consumers something he believes the established banks do not – transparency.

Here are three key themes the panel came up with as to what comms challenges financial services brands, particularly new ones, need to consider:

Have a story to tell
There are two kinds of challenger brands, May said. The kind that are responding to consumer demand, and those who are ahead of the consumer and looking further down the field, trying to generate their own wave.

Often new start-ups have a strong story to tell; led by individuals with strong philosophies who have done their ten or 15 years at an established company, and have identified a much better way of doing things.

Prove your worth
A brand needs to identify what it is actually challenging. That might be the rise of mobile banking, but it also might be about pulling down the barriers of sectors that were once only available to the few.

Challenger needs to prove that there’s substance behind their new and shiny offer, says Sandkuehler. “It’s very easy at the beginning when you have a new idea to gain media attention. But actually building a track record is when it becomes difficult.”

Alex agrees: “Of course, like babies, we scream loudly to try and grab attention…it’s the only way to get heard. But there’s only so much shouting and screaming you can do if you haven’t got anything substantial to put behind it.

“If you’re just another mobile bank with a great app, the banks are going to do it better then you at some point because they’ve got more money.”

Building trust is essential
There are two types of trust in banking, Letts explained: Trust that your money will be safe (something he believes UK banks manage to get across) and trust in how a bank deals with you, the consumer. This is where the opportunity lies for challengers.

“If you look at any consumer survey, they just don’t trust banks to be fair, honest and decent. We can win that trust because we are ethical and we do things in a new way.”

If you are attempting to change behaviour, trust is a key component, May stressed. Currently, in alternative financing like peer-to-peer lending, nearly all these platforms are going through a new regulatory phase, and not all of them will come out of the other side.

When trust in one company falls, similar brands will suffer to. “When you are a new entrant to the market, it’s often tricky to anticipate all the potential issues you might face…it just takes one of your competitors to face a substantial problem, which leads to everyone in the market being affected.”

Attending the briefing, Alison Esse, co-founder and director of change management consultancy The Storytellers, said: “It was a stimulating discussion with some amusing and eloquent speakers. It was great to hear their insights, not just about how challenger financial service businesses are disrupting the current status quo, but some very sobering observations about the truth of the way current banking works.

“You can see why consumers and businesses at the mercy of the big banks may want to do things differently.”

Alongside its programme of media briefings next year, Gorkana will also be running a series of panel events examining key communications and PR issues. Please contact events@gorkana.com if you would like to get involved. For details on upcoming events please go to the events channel online.