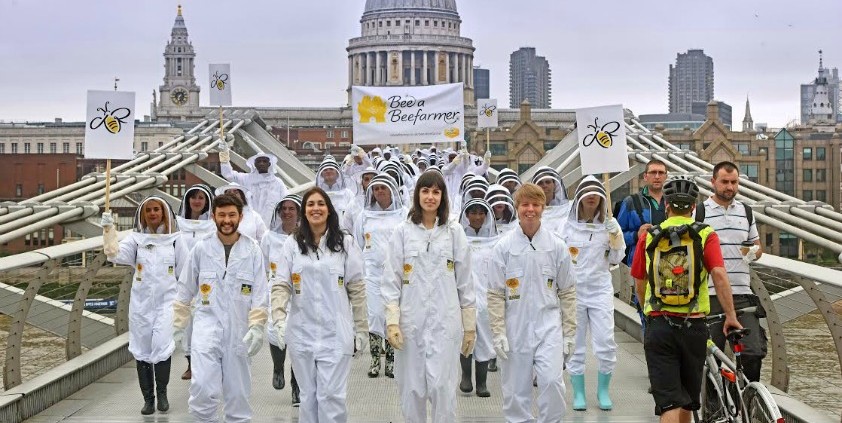 Rowse Honey, in partnership with the Bee Farming Association, created a new apprenticeship scheme to stop the decline of British bee-hives in the UK. Clarion Communications came up with a campaign, led by an army of more than 100 bee farmers, to promote the initiative which involved the take over of the Millennium Bridge in London. It worked – the apprenticeship scheme was massively over-subscribed.

Rowse Honey briefed Clarion Communications to drive awareness of the apprenticeship scheme and encourage recruitment among 18 to 24-year-olds across the country.

It was essential the campaign clearly communicated that it was a Rowse Honey initiative in order to show how the business continues to support the British bee farming industry and drive consumer preference over competitors.

A key objective of the campaign was to encourage young school leavers and graduates to sign up for the three year apprenticeship scheme. Therefore activity needed to drive broad, nationwide awareness, reaching both the target audience of 18 to 24-year-olds as well as their parents, teachers and educators.

Coverage needed to demonstrate how commercial bee-farming is a rewarding and sustainable long-term career and a valid alternative to more traditional options.

As a new apprenticeship scheme for a very little-known career path, Clarion’s challenge was to ensure the campaign secured maximum exposure to drive a high number of recruits and ensure all apprenticeship roles were filled.

Clarion’s approach was to create impactful, inspiring and wide-reaching content – underpinned with strong, in-depth messaging – in order to communicate the benefits of a career in bee farming and persuade young adults to register for the scheme.

A pilot scheme had already been put in place to test the feasibility of the apprenticeship scheme. Clarion’s strategy put the young apprentices who had taken part in the pilot scheme – and who had since committed to the full three year course – at the heart of the campaign, using their stories to educate and inspire their peers.

The Bee-a-Beefarmer campaign had three distinct phases to it:

A dedicated Bee-a-Beefarmer URL for apprentice registrations was created using the campaign name as a hook, and with Rowse branding built into the web address to ensure the brand was carried through in all content and coverage.

The campaign was launched with a photo stunt in central London: Over 100 bee farmers, led by four of the young apprentices, took over the city for the day, marching over the Millennium Bridge into the City to demonstrate the importance of safeguarding the future of the British bee farming industry for the economy.

The four young apprentices at the head of the march were pitched to national media for print and online interviews and profiling opportunities as the pictures were sent out to national media, whilst representatives of the Bee Farmers Association and Rowse Honey conducted a series of interviews across national and regional broadcast media.

To bring the nature of the bee farmer’s world to life through inspirational content, video crew and photographers were sent to capture the young bee-farmer apprentices in their natural working habitats around the country, securing striking imagery for further distribution to print and online media.

The unusual bee farming locations were pitched to media on a one-by-one basis as exclusive opportunities and the Clarion team worked with different media titles and channels to develop tailored content which would bring each of the apprentices’ stories to life.

Building on the awareness and excitement created by these two bursts of activity, a digital educational campaign was run in association with the Guardian, with a combination of advertorials and Apprentice profiles run across the site for six weeks, driving further traffic to the campaign website where potential candidates could register for more information on the scheme.

Editorial coverage generated by the campaign secured a total reach of 29 million across print, online and broadcast media. The apprenticeship scheme was over-subscribed by 85% by the end of the campaign, allowing Rowse Honey and The Bee Farmers Association to select only the best applicants for the scheme.

The campaign activity generated over 60 pieces of national consumer print, online and broadcast coverage, including the Guardian (twice), Metro, BBC Breakfast, BBC News Online, half a page apprentice profile in the London Evening Standard with branded photography and URL, full page in The Independent, Telegraph.co.uk and over 11 BBC radio interviews including BBC Radio 2 and BBC Radio 4 Farming Today.

Ian Ainsworth, MD of Rowse Honey, said: “In order to recruit a whole new generation of young bee farmers and encourage them to consider an unusual but highly rewarding career, it was absolutely essential we cast our net wide to find the right people.

“In order to do this we needed a campaign which had inspiring and persuasive content at its heart, and which resonated on a national level, driving young adults and school leavers to make a three year commitment. With Clarion’s campaign the scheme was over-subscribed by more than 85%, allowing us to ensure we can give these coveted apprenticeship positions to candidates of only the best calibre.”

Anyone fed up with a career in media or PR and would like to work with bees, should visit www.rowsehoney.co.uk/about-us/bee-a-beefarmer/ for more information.