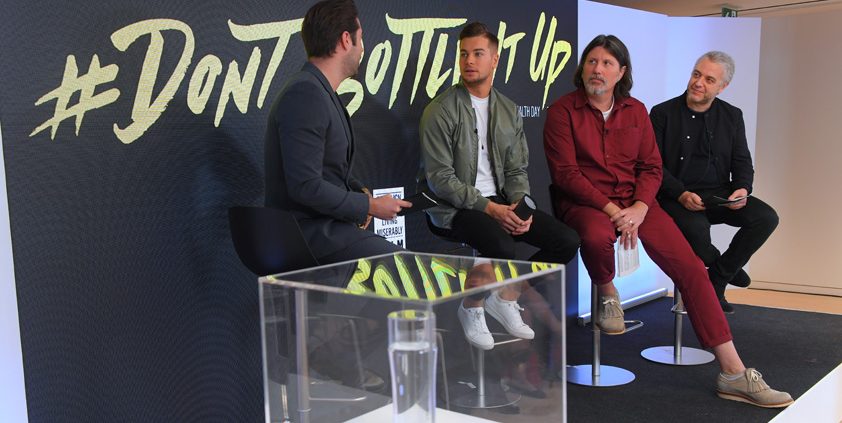 W used World Mental Health Day and a partnership with Topman and Love Island’s Chris Hughes to promote the CALM (Campaign Against Living Miserably) message to men that it is okay to open up about the problems they face.

Working at the heart of a multi-disciplinary inter-agency group, W helped launch the #DontBottleItUp campaign on World Mental Health Day with CALM, Topman, and Chris Hughes to show men it’s okay to open up rather than suppress their emotions.

The partnership between Chris Hughes, CALM, and Topman had the following mission:

Even though mental health is being talked about more and more in the media, suicide remains the biggest killer of men under 45 years old in the UK and 76% of all suicides are male.

CALM’s latest research showed that 84% of men in the UK bottle up their emotions and this devastating stat was what the campaign needed to challenge: a masculinity that impedes men’s ability to seek help when they’re low or in crisis.

W knew that if it could create a compelling context, we would be able to supercharge the impact of our activity and help us cut through on World Mental Health Day.

So on 9 October, with BMB, W launched with a provocative debut of “L’eau de Chris” – a premium mineral water bottle infused with Chris’ own tears; confident that his celebrity status would effectively capture the attention of mainstream UK media and consumers. And it did.

For twenty-four hours celebrity culture went crazy – everyone was talking about it. Twitter went wild. Media covered both the story, and the public’s reaction to it.

Then, on World Mental Health Day at a press conference at Topman’s office, with the spotlight firmly on Chris, he revealed that “L’eau de Chris” was actually “Ludicrous”. He wasn’t selling his own water.

The tear-infused water bottle symbolised the disturbing research that showed 84% of men actively bottle up their emotions on a daily basis. It was here that Chris was officially announced as CALM’s newest ambassador and face of the #DontBottleItUp campaign, encouraging men to defy traditional norms of masculinity and talk openly about their emotions.

During the #DontBottleItUp campaign, traffic to the CALM website climbed by 485% fuelled by 95% new visitors and 18 times more 18-24 year olds visiting the site, showing the campaign succeeded in tackling a major barrier to addressing the issue – actually getting young men to talk about their problems and feelings.

In the days following the campaign, awareness that suicide is the biggest killer of men under the age of 25 rose from 33% in November 2016 to 41% in November 2017. These powerful figures show that if men are able to ask for and seek help, hundreds of suicides could be prevented.

#DontBottleItUp delivered over 100 pieces of print, online and broadcast coverage, and had a total reach of over 3 billion across all social, OOH, digital display, and print channels.

Opinion: Why “PR” is having a renaissance
Brendon Craigie, co-founder and managing partner at Tyto PR, examines why PR professionals are once again adopting the PR moniker. The public relations industry is in the [...]
News Analysis
Request a Demo and Pricing
Connect on Social:
How the Museum of London boosted its visitor numbers with PR measurement