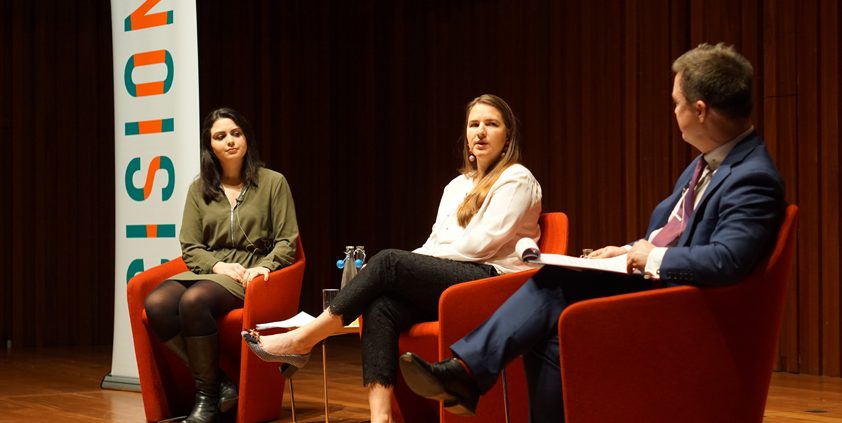 A focus on quality over quantity is behind CNBC’s rapid digital growth this year, Cristy Garratt, CNBC’s head of social media and digital video, said at yesterday’s Cision media briefing.

The broadcaster has seen online traffic to CNBC.com increase 40% in 2017, and its social media following rise 119% since the start of the year.

“What a lot of other newsmakers are doing out there is just trying to be responsive,” she explained. “But we are finding that those videos have a very short life and instead we focus on a ‘quality not quantity’ approach.”

Noelle Murbach-Lami, CNBC’s head of news and programming, added that the network’s top quality guests and expert commentators are what set it apart from other news channels.

Together, they briefed a packed auditorium at London’s Milton Court on the best ways to secure coverage on CNBC’s digital, social and broadcast channels.

CNBC prides itself on securing the best guests and setting the news agenda. To facilitate this, it operates a “first and exclusive” news policy.

“It means we have to be the first after a piece of breaking news, a big announcement or corporate earnings,” explained Murbach-Lami. “If you don’t come to us first, we don’t believe we can add as much value.”

She added that the CNBC team will then work collaboratively to find the best formats to tell your story and decide which news segments would suit it best.

It caters for an ‘influential’ and ‘aspirational’ audience

In Europe, CNBC reaches 8.3 million consumers every month. Murbach-Lami characterised this audience as being made of influential and aspirational business people.

“We also have the aspirational audience,” added Garratt. “These are people who are quickly rising in their careers and are looking for the tool set that they need to enter those C-suite or leadership positions.

“I would say our CNBC.com audience sits somewhere in the middle. Our social audience is very young, very millennial and very ambitious.”

CNBC starts broadcasting at 6am each weekday

CNBC produces four hours of live TV out of London each weekday, with three dedicated to its flagship Squawk Box Europe show.

“Broadcast is funny because there’s a very clear structure to your day,” said Murbach-Lami. “A 3am-4am start is absolutely necessary if you know you’re going to air at 6am.”

Garratt added: “The digital team does rotate, so occasionally we will have digital members of the team coming in for that 2.30am-3am shift. But generally they start getting in for 5.30am-6am to capture the opening of the market.”

Consider the news context before pitching

CNBC is happy to receive phone and email pitches. But it’s important to consider both where and when your story might run.

“Don’t pitch when the world’s unravelling,” quipped Murbach-Lami. “Don’t pitch while we’re on air unless it’s related to something that’s just broken.”

“A lot of people that are successful at pitching to us are people we’ve worked with for a very long time and we’ve built very strong relationships with,” she added. “We know we’re very interdependent and that’s the ideal place to get to.”

Opinion: Why “PR” is having a renaissance
Brendon Craigie, co-founder and managing partner at Tyto PR, examines why PR professionals are once again adopting the PR moniker. The public relations industry is in the [...]
News Analysis
Request a Demo and Pricing
Connect on Social:
Why every brand should be using influencers in 2018