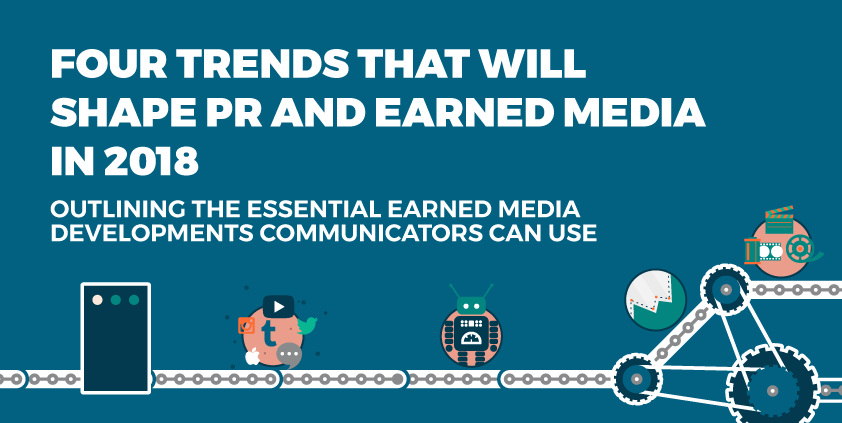 2018 promises to be another intriguing year in the evolution of the PR industry as economic, social and technological trends continue to change the earned media landscape.

Whether it’s the development of new technology or the way in which consumers view the world, earned media’s evolution this year will see divergence from “traditional” operations.

Artificial Intelligence, video, earned media measurement and brands taking a stance will all play a key role for communicators over the course of this year. Cision’s latest white paper reveals how you can get ahead of these four essential trends, which are set to shape earned media throughout 2018.

The PR industry will further harness the power of AI

While the rise of Artificial Intelligence has been widely discussed throughout the media over the past few years, 2018 is the year that its development will begin to make an impression on the work of communicators.

Chatbots are already being used to interact with consumers, while the evolution of consumer tech devices using AI, such as home automation devices, opens up exciting opportunities for communicators.

As the algorithms powering machine learning become ever more refined, the PR industry will be able to use AI to improve the efficiency with which they can process vast amounts of data, as well as unlock the insights contained in data.

One area where communicators can make best use of advancing technology is through earned media measurement.

Earned media practitioners have seen their budgets remain stagnant when compared to paid media colleagues over the past few years. This does not reflect the effectiveness of earned media; instead it shows that paid media has been far better at attributing its results to company objectives and illustrating its value to an organisation.

This year new technological advances, including Cision software, will allow communicators to begin to attribute value to their work and earn their fair share of the marketing budget.

Social media has evolved public discourse to the point where people and organisations are expected to speak out on the social issues affecting the world today. As seen last year, brands have to take a stance on social issues in order to satisfy consumers who expect them to stand for something.

Given that brands have traditionally shied away from commenting on social issues, the result of their forays into social commentary so far has been mixed.

For every Lyft, which was able to temporarily overtake Uber as in downloads following a donation to the American Civil Liberties Union, there is a Pepsi, which faced a backlash after a campaign featuring Kendall Jenner using the beverage to calm a stand-off between police and protestors.

Video will dominate in 2018

Earned media practitioners will continue to harness video content to power their stories in 2018.

A survey by video company Animoto found that four times as many consumers would rather watch a video about a product than read about it. As such, earned media professionals need to produce engaging video content to maximise the impact of their campaigns.

As video content continues to proliferate across a variety of platforms, communicators will need to ensure that they tailor their videos to each platform they use to appeal to the different audiences they are trying to reach.

Communicators will need to plan for how these four aspects of earned media will affect their work in 2018. To find out how you can take advantage of these trends, enter your details into the form below and download ‘Four trends that will shape PR and earned media in 2018’.

Opinion: Why “PR” is having a renaissance
Brendon Craigie, co-founder and managing partner at Tyto PR, examines why PR professionals are once again adopting the PR moniker. The public relations industry is in the [...]
News Analysis
Request a Demo and Pricing
Connect on Social:
How to create a powerful media relations strategy for 2018