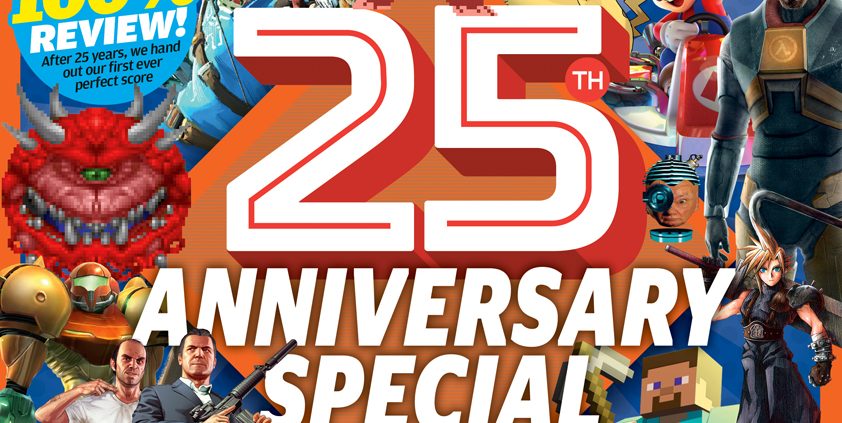 Robin Valentine, editor of GamesMaster, outlines what is in the magazine’s 25th anniversary edition, how it has changed over the years and the game he’s most looking forward to playing this year.

GamesMaster has just launched a special edition celebrating its 25th anniversary. What’s covered in the magazine?

For our big birthday celebration, we’ve put together a huge feature packed with all kinds of nostalgia.

We’ve ranked the best games of the last 25 years, chosen our favourite moments in gaming history, chatted with past editors about their fond memories of the magazine, interviewed Dave Perry about the classic TV show [of the same name], taken a look back at some of GM’s weirdest covers and we’ve even put together a GamesMaster quiz!

That’s in addition to the usual complement of news, previews, reviews, special features, regulars and more! And in this issue we’ve actually handed out our first ever 100% review score, so it’s historic in more ways than one.

What was your favourite part of putting together the commemorative magazine?

We managed to uncover an archive of every GamesMaster cover ever. And though they ultimately played a relatively small part in the feature, it was a blast looking back through them.

There are some truly fantastic covers in there – I’m especially fond of the first 10 or so, which each had bespoke commissioned artwork on the front. Flicking through them all is like taking in an abridged history of GamesMaster.

How much has the magazine and its content changed?

A lot! It’s funny, because many of our readers do pick up the magazine out of nostalgia and think of us as a very old school mag still. But if you actually go back and read an early GM, you see how much has actually changed. It goes to show that really what’s important is embodying the spirit of the brand, rather than sticking too close to the details.

One example is that, while our pages are quite ‘busy’ these days (with lots of boxouts and pull quotes and captioned images and stuff), they’re practically minimalist compared to the hyper-dense pages the magazine used to have!

The tone has definitely changed more than people realise, too. We’ve still got that sense of fun and that totally unabashed excitement about gaming. But back in the day GM was also very much a boy’s club, with a lot of lad jokes and crude comments about Lara Croft’s bottom. That just wouldn’t fly today. (Anyone remember when Dominik Diamond’s Big Purple Column was a regular feature?)

These days, a big part of GM’s message is inclusivity. We want gaming to be a welcoming space that anyone can enjoy – and our sense of humour is a bit different as a result.

Do you think that GamesMaster’s audience, or at least the demographic, has changed over the past 25 years?

Yes and no. A lot of our readers have stuck with us for years – some of them since issue 1, even. So in that sense some of our audience is literally the same people! But obviously the context around games magazines is totally different now than it was 25 years ago.

GamesMaster, and games magazines in general, just used to be a much bigger, more mainstream thing, and one of the main sources of gaming news and reviews for 100,000s of people.

These days, with the internet having taken over, games magazines are more niche. And I think people read them for different reasons – whether that’s nostalgia, a love for magazines as a medium or an affection for the ‘personality’ of the brand.

What do you think has been the secret of the title’s success?

GamesMaster has always had this really strong personality that people connect with. It’s about more than just presenting the latest games info – we’ve always presented it in our own defined voice. It’s something we very much inherited from the TV show. And over the years we’ve run with it in a way that has earned us a brilliantly loyal fan base.

How does the title work with PRs? What’s your relationship like with them?

PRs are hugely important to what we do, so I always try to keep those relationships as healthy and cooperative as possible.

I think in this industry we’re very lucky. The vast majority of PRs we deal with are so talented and hard working and have such a good understanding of how we in the press operate that it makes our job a lot easier than it could be!

Finally, which game are you most looking forward to being released?

I’m really excited for a game called Biomutant. You play this little raccoon creature living in a post-apocalyptic world and you can change your DNA on the fly. It just looks wonderfully weird and ambitious!

Opinion: Why “PR” is having a renaissance
Brendon Craigie, co-founder and managing partner at Tyto PR, examines why PR professionals are once again adopting the PR moniker. The public relations industry is in the [...]
News Analysis
Request a Demo and Pricing
Connect on Social:
60 Seconds with Nobull Communications’ Steve Carman