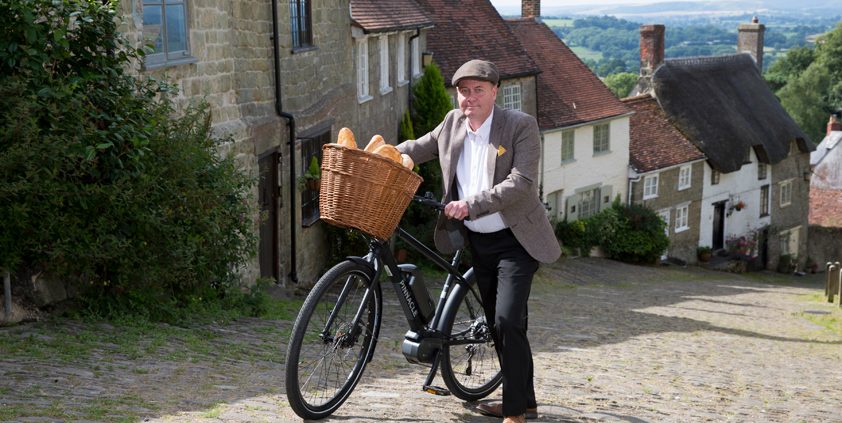 Richard Paul, PR consultant at Propellernet, reveals how the agency helped Evans Cycles to promote its electric bikes by visiting the hill made famous by the classic Hovis advert.

Electric bikes (or e-bikes) are relatively unknown in the UK, despite being popular in other parts of Europe. Their benefits of both helping people to keep cycling later into their life and providing a more straight-forward, less-sweaty commuting option, presented an opportunity for Evans Cycles.

The campaign needed to present these benefits in a way that the British public would easily identify with.

With this in mind, Propellernet decided to revisit what has been voted Britain’s favourite advert – the Ridley Scott-directed 1973 Hovis spot ‘Boy on Bike’ – helping the now 58-year-old childhood actor from the original finally conquer the steep incline of Gold Hill, with the help of an electric bike.

Research showed that e-bikes are somewhat unknown by the general public in the UK.

In the cycling community, their advantages are either celebrated by people that own them or are chastised by the more ‘hardcore’ cyclists that feel they represent cheating, due to their “pedal assist” functionality.

Therefore, the campaign needed to:

Propellernet’s research identified two main audience types that would benefit from using an e-bike, both of which were more likely to be male and were 35+ years of age:

Taking the above audiences and their age/gender into account, Propellernet decided to create a story that would focus on using nostalgia to bring an electric future to life.

The strategy was to pair an attention-grabbing piece of content (the famous ride up Gold Hill), with a data-led story emphasising the benefits of the technology.

Our findings suggested that UK commuters who don’t currently cycle to work could save an average of £7,791 on their current commute in just five years by using an e-bike.

Return to Gold Hill achieved coverage in over 50 publications, with a combined readership of over 1.5 billion. It generated overwhelmingly positive feedback from the cycling community across social media and in cycling-specific publications.

Coverage in the Daily Mail print and online versions even became the inspiration for a follow-up article by the title, which looked back at other childhood actors and placed a further spotlight on the ‘Hovis boy’ and the many benefits of his electric bike.

The video recreation was viewed online over 400,000 times across Evans Cycles channels and the official Hovis Facebook page, which also shared the recreation to its own audience.

This resulted in a wide-ranging increase in search rankings for Evans Cycles in e-bike related terms, such as ‘e-bike’ moving from 7th to 2nd position and ‘e-bikes’ to the top spot in Google. This additional search traffic and brand recognition around Evans Cycles’ electric bikes resulted in an ROI of 795%.

Opinion: Why “PR” is having a renaissance
Brendon Craigie, co-founder and managing partner at Tyto PR, examines why PR professionals are once again adopting the PR moniker. The public relations industry is in the [...]
News Analysis
Request a Demo and Pricing
Connect on Social:
PR Case Study: Newsfeed PR – There But Not There