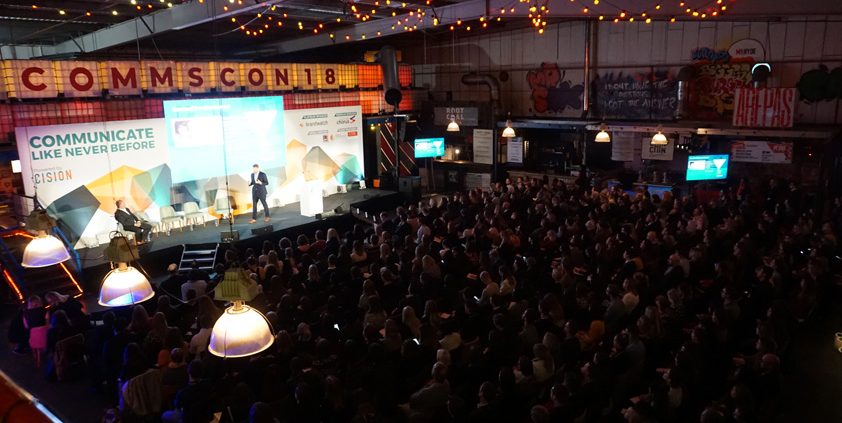 We promised that CommsCon would be a day of discussion, insight and debate, and judging by the response we’ve had from our delegates, we are delighted to have lived-up to the billing and are thankful so many of you joined the comms revolution!

We’re glad that every session provided some great insights and tips for how you can hone your comms output. Here are some of our key highlights and takeaways from the day.

Define your values or someone else will

In his keynote address, Sir Craig Oliver highlighted the importance of businesses telling their own stories. “Silence comes at a price. If you don’t define yourself, others will do it for you,” he warned.

Using anecdotes and insights gleaned from his time as former prime minister David Cameron’s director of politics and communications, Oliver said that while the comms function has been demoted in importance in a number businesses, it is actually more valuable than ever.

The solution to this underfunding of the sector? Earned Media Management.

When KFC ran out of chicken

Delegates listened with fascination as KFC’s head of brand engagement, Jenny Packwood, revealed how the company’s comms team looked to deal with its “chicken crisis”.

She explained: “So often when crisis hits, the easy and most comfortable thing is to retract into that safe corporate space where you do a terribly formal statement and everything sounds like it is written by a lawyer.

“We actively decided not to do that. We know who we are as a brand and what our tone is and we stuck to it, which is light-hearted, honest, authentic and a little bit irreverent.”

The session also saw Gumtree’s head of communications, Fergus Campbell, explain how the company has looked to be more proactive in managing its reputation to avoid “death by 1,000 paper cuts”, while Ed O’Brien, MD crisis management at Teneo Blue Rubicon, warned of the various demons which threaten every crisis comms response.

The launch of the Cision Innovation Lab

At the conclusion of his opening keynote, Kevin Akeroyd made the announcement that Cision was launching its Innovation Lab, based in New York and Berlin.

Following on from this announcement, Cision’s David Barker, president of data solutions and innovation, Kaila Garrision, VP marketing strategy and operations, expanded on the developments in Cision’s Innovation Lab during a session later in the day.

The pair detailed the new technology available now to help communicators, such as Cision ImageIQ’s image monitoring software, while also revealing the areas of earned media in which the company is looking to innovate.

How to tell great stories

The quartet each presented their favourite of example of storytelling from the last year – ranging from Virgin’s LGBTQ+ campaign to the Bihor not Dior activation.

Plowman made the important point that storytellers need to think more about how they want the audience to react when coming up with stories, rather than what they want to say.

She said: “Often we start with ‘this is what we want to say to our customers’. You have to consider what you want your customers to do with the content you’re giving them, how do you want them to feel or react?”

Journalists tell PRs what they want

In one of the day’s closing sessions, a panel of senior journalists detailed just what it is they want from PRs.

The Daily Mirror’s Nada Farhoud, Glamour’s Josh Newis-Smith, Pink News’s Ellen Stewart and Financial News’s Paul Hodkinson covered everything from how their roles are changing to their tips on how PRs can pitch stories to them.

There were gasps from audience members when Farhoud revealed that she had 92,000 unread emails in her inbox. The panel all agreed that PRs needed to look to build relationships with journalists to make to help make their pitches stand out.

Peter Heneghan, LADbible’s head of communications, provided his recipe for campaigns which use social publishers and platforms to promote social good.

Using the example of the social publisher’s Trash Isles campaign, Heneghan noted that the younger demographic who consume content created by social publishers really care about issues which affect them and want brands to care too.

He added that when coming up with campaigns, communicators should consider whether it is something that would be interesting enough to talk about with friends at the pub. If not, customers would be unlikely to engage with it, he warned

How PR can break free from its “whiteness”

A diverse panel of industry luminaries discussed one consistent issue which rears its head in PR; how to make the sector more inclusive for people from a variety of backgrounds?

Dr Lee Edwards, associate professor at LSE’s department of media and communications, presented research which demonstrated that “whiteness” goes beyond the colour of people’s skin. Then, Vodafone Group’s Isobel Bradshaw, Hawthorn Advisors’ Kuldeep Mehmi, Hays’ Yvonne Smyth and Burson Rx’s Avril Lee shared their reaction to the findings and their own experiences of diversity in the industry.

Mehmi noted that industry needs: …a cultural change to drive inclusivity, more than just initiatives people sign up to. It’s about changing behaviour.”

CommsCon saw the presentation of the inaugural Cision Comms Revolutionist Awards, presented to those campaigns which achieved measurable outcomes which enabled organisations to take action based on the results.

While every nominated campaign deserved to win, our panel of expert judges had the difficult task in finding the winners for each of the four categories.

Summing up the themes of the day

To help reflect on CommsCon’s key findings, Brandwatch founder and CEO Giles Palmer joined Kevin Akeroyd and Cision’s president, EMIA, Abe Smith on stage. The trio expounded upon the need to use data-driven tools to help predict and assess the best times and places to put out your messages.

Smith then delivered a rallying cry to all of CommsCon’s attendees, declaring that the earned media revolution was well underway.

And finally, thank you!

An event is only as good as its audience, so it would be wrong not to acknowledge the fantastic part our delegates played in making CommsCon such a special day. We’d like to thank all of our attendees for helping to create the buzz around the event and for packing out the venue.

Opinion: Why “PR” is having a renaissance
Brendon Craigie, co-founder and managing partner at Tyto PR, examines why PR professionals are once again adopting the PR moniker. The public relations industry is in the [...]
News Analysis
Request a Demo and Pricing
Connect on Social:
One day to go until CommsCon