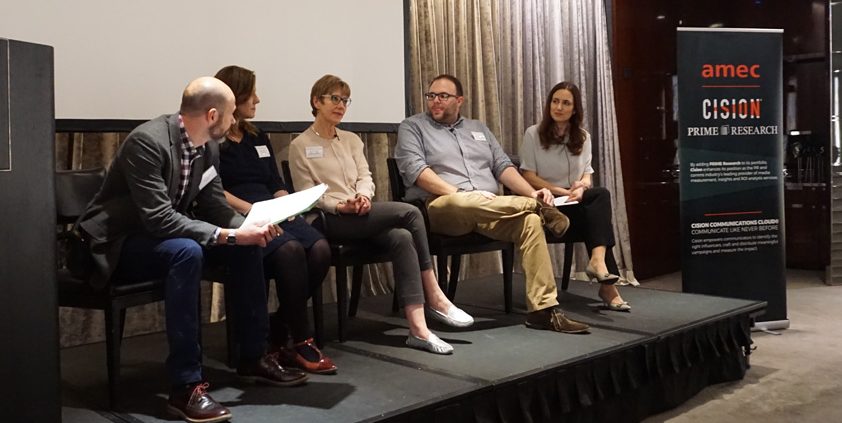 According to industry analysts Burton-Taylor, analytics is the fastest growing segment within the media intelligence sector.

What’s more, the technology driving this measurement revolution is having a transformational effect on the media as a whole, as Nadin Vernon, strategy consultant at PRIME Research, highlighted last night.

She was speaking at PR measurement in practice, a panel event celebrating the coming together of Cision and PRIME Research – combining the world’s two most awarded media measurement firms into a single intelligence powerhouse.

Measuring results is the key to securing budget

Paul Hender, Cision’s head of insight referenced an Outsell survey of over 1,500 marketers where the vast majority said earned media is as effective as, if not more effective than paid media.

Even though marketers grasp the value of earned media, it’s paid media that gets the lion’s share of marketing budget.

“85% of new ad spend is going to just two sources, and we all know who they are,” said Hender. “The reason it’s going to Google and Facebook is because these are platforms that offer data.”

He added: “The lesson is that for earned media to earn more resource and more budget, it needs for get better at measurement.”

How you measure PR depends on your goals

Vanessa Wilson, UK Sport’s director of comms, revealed how she enlisted Cision to tackle a media crisis and provide the analytics and evidence to prove her crisis strategy was working.

“It was actually quite revelatory, because one of the first things was just putting some context around it,” she said. “It’s great for the morale of the team, in terms of saying that we’re doing the right thing.”

Jenny Caven, head of external affairs at Slimming World, added that the company weaves PR measurement into the fabric of its annual January weight loss campaigns.

She said: “We were able to show the value of all our comms and PR activity in driving traffic to our website, as well as accounting for more than 50% of all the members who joined the local groups in January in 2017.”

Why the ONS cares about more than just positive coverage

As the Office for National Statistics discovered, the specific objectives of your organisation can have a huge impact on the way you go about measuring your PR programmes.

Martin Nicholls, head of strategic communication at the ONS, outlined how PRIME Research helped them develop accessible KPIs for understanding the quality, relevance and authority of earned media coverage.

“As a business, we used to rely on sentiment an awful lot,” he said. “We’d target ourselves to keep under 2% negative. Does that mean the other 98% was positive? No. It actually means about 90% of it was neutral.”

“Going forwards, I’m trying to remove the extreme volatile positive and negative approach and focus more on the neutral,” he added. “Our business model isn’t about generating positive coverage. It’s about informing debate and producing the statistics that help Britain make better decisions.”

The challenge many communicators run into when trying to measure the success of their campaigns is that there’s no ‘one size fits all’ metric to turn to. How you measure a PR campaign depends on its goals.

“What you’re trying to do in terms of understanding your goals really should dictate how you should go about measuring your work,” Hender explained. “PR can do lots of different things.”

Applying the AMEC measurement framework when planning your PR campaigns is a great way to identify the best metrics for what you’re trying to achieve. You can then combine this framework with the latest tools and techniques to measure the business impact of your earned media initiatives.

“What we do for the Museum of London is track their media coverage against their visitor numbers,” Hender explained. “We can see directly when there’s a campaign about a particular exhibition and track those visitor numbers, and you can see the direct correlation between the two.”

Cision launches unmissable comms event – CommsCon
Cision has launched CommsCon, a communications congress which will showcase the revolution sweeping across the earned media landscape. The biggest names in the business will [...]
Industry News

Abe Smith: Tarot cards, crystal balls and the democratisation of analysis
On stage in Barcelona, surrounded by hundreds of the most attuned PR professionals globally, it hit me – right then, right there. As I said the words “a PR evolution is [...]
Company News

How AMEC’s ‘maturity mapper’ will transform the PR industry
AMEC’s Measurement Maturity Mapper will help communicators uncover the vital insights they need to build more effective PR campaigns, its creators said in this week’s webinar [...]
PR Tips
Request a Demo and Pricing
Connect on Social:
Stylist: We want our Visible Women campaign to make a difference