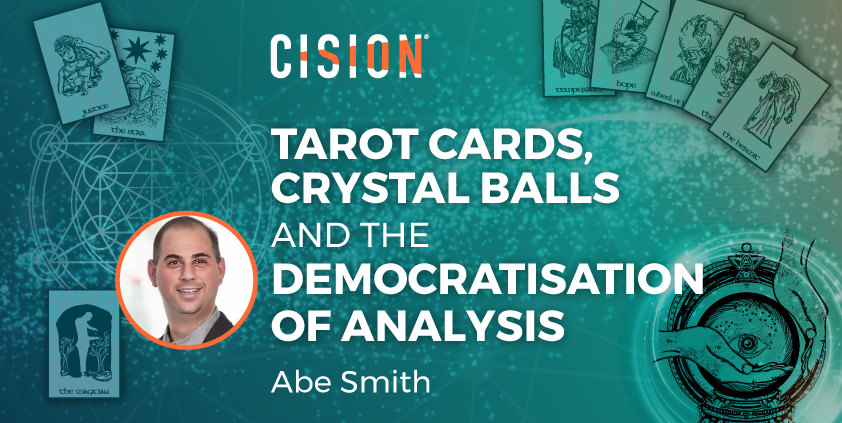 On stage in Barcelona, surrounded by hundreds of the most attuned PR professionals globally, it hit me – right then, right there. As I said the words “a PR evolution is cresting into a PR revolution,” it felt as if the genie was proverbially let out of the bottle.

It was the AMEC Summit 2018 and the timing couldn’t have been better for a revelation. As I waxed philosophical on the alchemy of our industry – and likened the state of PR analytics to reading tarot cards – the metaphor of seeing opaque insights in the media we monitor was the observation.

While we can assess the directional outcomes in broad brush strokes, and derive value for sure, the opportunity for clarity, precision and attribution finally seemed at our fingertips. The magic of moving from cards to crystal balls was evident and the evolution was real that day in Spain.

I looked out into the audience and saw Fergus Campbell from Gumtree, the leading online British classified site, and reflected on his sagacious comment: “We want to answer questions like: how much can we, through PR, help to reduce the number of customer services issues? And can we drive site traffic in specific categories, and at specific times?”

He was right. With the ability to ascribe pick-up to positive business outcomes happening, the revolution had started in the hands of practitioners like Fergus and others, such as Anil Ranchod, the deputy director of PR and communications for the UK Stroke Association.

Anil had inspired me in the past with a higher mission of not just scoring an article but, rather, saving lives. His measurement was based on proselytising the acronym FAST to inform a worldwide audience of how to detect a stroke.

When he succeeded – and he has – his work correlated to preventing death from one of the most harming causes. And he did so with the mathematical precision of scientist, albeit one fuelled by an abacus rather than a calculator.

With a myriad of pundits in the room, it felt like I was at the Olympics of Analytics with some outstanding work showcased, ranging from the likes of Alex Aiken of the UK government, to David Rockland from Ketchum Global Research to our very own Paul Hender from Cision.

While the discussion referred to the principles developed in 2010 and evolved in 2015 in Barcelona as the framework for measurement (aka the Barcelona Principles), and talked about the death of AVE (apparently used by only 16% of the industry now), there was an undercurrent looming.

When the godfather himself, David Rockland, challenged the audience to think about what if PR in its entirety were to be dead in ten years, I knew I had arrived. The dialogue of Artificial Intelligence and a new wave of quantified results were driven by the Johnny Rottens you would have expected – specifically, the upstarts of Silicon Valley-like companies now jockeying for position at AMEC.

Of course, hearing from the likes of Dr Jennifer Bruce from Adobe and Jamin Spitzer from Microsoft lent credibility, in so much as you didn’t need to be a 20 person start-up or venture funded growth firm to know the time had come to evolve and to question the norm.

The best part is companies like Microsoft and Adobe were fully transparent, in a really honest way, to say “hey we’ve got part of this right but we’re learning too—we don’t have it all figured out.”

With all the fanfare of a 300 person conference dedicated to the battle cry of “insights, innovation and integration”, it was the message delivered at 17:00 after eight hours of content that really got me. The room was half-full at that time with the die-hards still standing and the other half already off to the beaches of Barcelona, but for those that caught it, pure magic was about to happen.

Truth be known, I stumbled in to the auditorium myself with the intent to hear the words of a client, Jenny Caven of Slimming World, in an effort to pay homage to her previous AMEC awards and 2018 nomination.

What transpired in the 25 minutes that followed was like listening to poetry. When Jenny explained that both her and her team had been sceptical at even considering a regiment of measurement a year and a half ago, she grabbed my attention.

Like the converted, however, she then regaled the audience with real examples of campaign after campaign driving towards core business initiatives, like aligning PR to new members signed on for its weight loss programmes. And darn straight, the numbers were provocative, with clear figure after clear figure showing the reality, not some superficial numbers around audience or reach.

And the pages went on and on, so much so that she graciously acknowledged, “happy to share them after the drinks if you’d like a copy.” This is a woman converted and on a mission, who punctuated her talk with “now it’s time to see how we converge paid, owned and earned as the next step in the journey.”

Her words were validated later that night with a windfall of AMEC recognitions – including the Gold Award for Best Use of Integrated Communication Measurement/Reach. The darling of the convention, in my mind, was not the technology giants nor the AI geniuses, but the health and weight company who showed us all what great looks like.

As the event came to a close, and handshakes turned to hugs, I left Barcelona optimistic and energetic. With the symbolic passing of the baton from the fantastic AMEC CEO Barry Leggetter to the soon-to-be-named next generation leader, the dawn of a new era was obvious.

The trends I see in the next five years include the Uberisation of analysis (democratisation and availability of data for everyone derived from the hands of analysts), the movement from insights to PR prescriptions driven by empirical evidence and the optimisation of workflow for practitioners to do their job better with more precision and better hit success.

Machine learning will be fuelled in the short term by people and the human coding that the industry has harvested for years. The balance between art and science will never be clearer than it is now, with higher value work being derived and processing being relegated to the “machines”. It’s a heady time for the industry but one whose time has come.

For all of us in the industry, it’s time. It’s time to dive in, shake it up and carry the industry forward.

So as The Beatles said, it’s time to join the revolution! 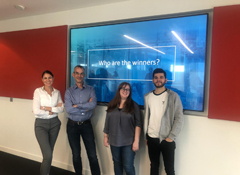 Cision reveals Comms Revolutionist Awards shortlist for CommsCon
Cision is delighted to announce the final shortlist for the Comms Revolutionist Awards, with the winners announced at CommsCon on Tuesday 6 November. The awards will showcase [...]
Industry News
How to communicate about PR measurement
PR remains an obscure discipline from an outsider’s point of view. Therefore, it goes without saying that its measurement probably baffles more people than we think, including [...]
Insights 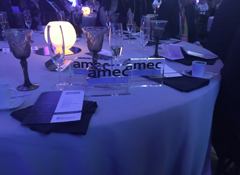 Cision celebrates a golden night at the 2018 AMEC Awards
It was a golden night for Cision at last night’s AMEC Awards, as its companies took home a combined 12 prizes, including four Gold awards. Cision achieved a sweep of the [...]
Industry News
Request a Demo and Pricing
Connect on Social:
Jennifer Palmieri: “You don’t need to act as if you belong – you DO...