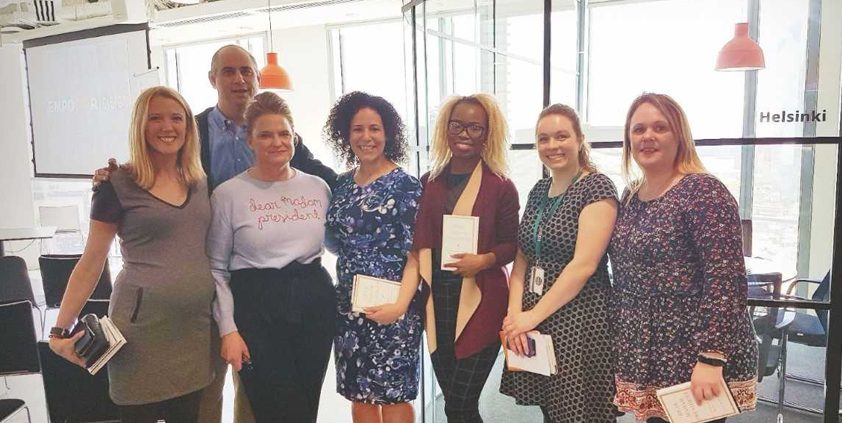 On Wednesday 25th April, we had the privilege of a talk and Q&A session from Jennifer Palmieri as part of the Cision UK office’s Empower initiative.

Palmieri was the White House Director of Communications for President Barack Obama, and Communications Director for Hillary Clinton’s 2016 presidential campaign, and she has recently published a book, “Dear Madam President: An Open Letter to the Women Who Will Run the World”, which shares lessons from her time in the White House and on the campaign trail for women who want to lead.

Speaking to a packed house, Palmieri spoke about what she thinks the future holds, and gave her thoughts on how women can succeed as leaders. Rather than feeling defeated after the 2016 election, Ms Palmieri stated that movements such as the Women’s March, #MeToo and the fact that more women than ever are running for public office in the US is giving her hope for the future; that women are “creating a new set of rules, making our own game”.

She said that it is “empowering to realise the challenge before you and realise that you do have the ability to change things”. The future is female, she noted, but “the past was too, it’s just that no one thought to write it down”.

Women need to own who and what they are, according to Ms Palmieri, rather than try to fit into a male idea of how women should be. Hillary Clinton was made to be a “female facsimile of the qualities we look for in a male president”, rather than being valued for the unique attributes she could bring to the role as a woman. Clinton was also more popular in a job role than she was when running for it, Ms Palmieri stated, as it was seemingly her ambition for a job (rather than her ability to actually perform) that people disliked.

Similarly, she talked about expressing emotion in the workplace – something typically frowned upon as a sign of weakness, and described the pressure on women to seem tough at all times, capable of absorbing anything. Instead, she has decided to “nod less, cry more”, noting that the passion and emotion she feels for her work is an advantage.

Giving us a window into her time in Obama’s White House, Palmieri spoke of how Obama would never end a meeting without asking the opinions of anyone who hadn’t previously spoken up – not to be polite or to make people feel included, but because he needed their views. “It was the people who didn’t look like everyone else in the room who gave the President the most insight. Women have held themselves back in the past by thinking that they don’t have anything important to say, but often our viewpoint is the one that needs to be shared”.

“People take their cue from you”, Ms Palmieri told us. “You don’t need to act as if you belong, you DO belong”. Empowering words, which inspired us all to walk a little taller.

Our key takeaways from CommsCon
We promised that CommsCon would be a day of discussion, insight and debate, and judging by the response we’ve had from our delegates, we are delighted to have lived-up to the [...]
Industry News
Request a Demo and Pricing
Connect on Social:
AI and the future of sentiment analysis in PR